There isn't a lot written about the very earliest days of a startup. My guess is that those memories fade fast, a bit like the months after having a first baby. So, I want to share what we’ve learned—before my memories fade.

Yesterday, my co-founder Victoria and I discussed what we're building for the first time publicly. Our mission is to reinvent the way that people learn and grow at work.

If you’re anything like me, you have a growing stack of unread newsletters, saved tweets, downloaded podcast episodes, online courses to complete, and unopened books to read. It’s easier than ever to acquire knowledge, but harder than ever to turn theory and concepts into impact.

In the fall, we launched Guided Masterclasses: intensive, practice-driven, 4-week programs supported by a 1:1 coach.

After months of hard work, we saw the early signs of product/market fit. But, the current product is pretty different from we what we set out to build.

I want to share 5 lessons we learned on that windy path from zero to something resembling "one".

Lesson 1: Learn from other domains

At Tripadvisor, we started a new team to focus on the product's search & discovery experience. We knew that people often struggled to find the right restaurants, attractions, and accommodations—both before and during their trip.

We looked at other travel companies for inspiration, but couldn't find an experience that put enough emphasis on discovery. Established players were optimized for the conversion-driven search for bookable hotels.

Instead, we found inspiration in other domains: Spotify, Etsy, and Amazon all excel at solving for search & discovery when the user isn't sure what they are looking for.

For many years, I knew that coaching had played a pivotal role in my career and was a secret superpower shared by many successful leaders.

But, I didn't see a path to democratize coaching. Until, I started advising a D2C healthcare company called Sesame. The doctor/patient relationship is a high stakes, personal connection that resisted the technological change that had swept many other fields.

In recent years, companies like Hims, Roman, and Teladoc have reinvented that relationship by optimizing the inefficient parts and preserving human connection where that connection plays a vital role.

💡 Inventing something new? Look far and wide for inspiration.

Lesson 2: Speed is more about latency than velocity

"Move fast" is a widely preached best practice than can have disastrous results. Virtue signaling around speed is all around us: look how fast we added more employees! More funding! More users!

The problem is that velocity comes with a cost. The faster a car is going, the slower it turns. The same is true for teams & companies.

In the early days of product discovery, the most important metric to optimize is time from hypothesis to insight.

We've decreased latency by keeping the team small and using a stack of no-code tools like Webflow, ConvertKit, Typeform, and Zapier.

Surprisingly, the primary advantage of these no-code tools hasn't been saving time (i.e., increasing velocity). For example, a good designer can build a page just as fast in CSS as in Webflow.

Instead, the advantage has been flexibility and agility. Our small team can make and deploy constant changes to decrease the latency between idea and impact.

💡 During product discovery, ask yourself: What can we do to decrease the time from hypothesis to insight?

Lesson 3: I could teach you but I'd have to charge

(If you get that reference, you deserve a milkshake.)

We originally started with a model similar to Talkspace's "text therapy" approach. We hypothesized that we could provide an effective coaching relationship via messaging at a more accessible price point.

Our early tests went well. We found high engagement and retention. We were also surprised by the authenticity and depth of the conversations. People seemed to love the service.

Then, we decided to charge for the service so that we could scale to more people. We found that many of our satisfied users weren't ready to pay. Some users were willing to try the paid service for a month, but too many ended up churning in their second month.

We didn't want to simply provide expensive coaching sessions, because that would pull us away from our mission of making 1:1 guidance more accessible.

We went back to the drawing board and developed Guided Masterclasses. We charged for the Guided Masterclasses out of the gate (a hard decision given that we weren't sure we were adding enough value—we offered a 100% money back guarantee). We also gave free passes to a few people that had expressed an interest in the programs.

This time, we found the exact opposite. Our paid users completed their programs and were highly satisfied with the experience. Meanwhile, our free users churned. Now, we're delivering value that people are willing to pay for and, critically, payment is an important part of the product experience that increases commitment and satisfaction.

In a short time span, we've twice learned an important lesson. Willingness to pay is a tricky thing, driven more by psychology than rationality. You have to charge people to get accurate signal on the market fit for a paid product, even when charging people may feel uncomfortable.

💡 Your business model is an integral part of your product experience—and can't be accurately tested in isolation.

I've been spoiled working at Tinder, Facebook, and Tripadvisor. We always had millions of data points to work with. It was easy and fast to run experiments that would lead to statistically significant results.

But I also noticed an over-reliance on data. Peering into dashboards helps you understand the "what", but the "why" can remain elusive.

The best product teams I've worked with triangulate their insights—using both quantitative data and qualitative research to make product decisions.

This is even more critical during zero-to-one product discovery. Of course, there isn't a lot of data to begin with. That’s one problem. But, that can lead to another problem. The process of getting more data can be counter-productive—both because growing prematurely can accelerate momentum in the wrong direction and because data is often misleading at this point.

Frequent conversations with early users is the antidote. Each conversation will add deeply to the team's understanding. We don't have a lot of process yet, but we've built a habit around a lightweight feedback process—every time a customer provides feedback, we put quick notes into Notion and discuss a couple of takeaways.

The concern I often hear is: Can you really make product decisions based on a handful of conversations? I've been surprised at how quickly patterns emerge. Years ago, I worked with a User Research Lead at Xbox who was adamant about this. He preached, "You don't need more than 17 people to play a game to know if it is fun."

At the time, I was skeptical. Now I believe he had the right idea. During product discovery, we don't need to reach statistical significance. We need to reach informed conviction. That bar requires fewer, but deeper inputs.

💡 When faced with an important product discovery decision, ask yourself: What data do we need to reach informed conviction?

Lesson 5: Fall in love with the problem, not the solution.

This one falls into the category of common sense advice that is: “Easy to learn, hard to do.”

Victoria and I started with premise that is blindingly true: The majority of people put enormous pressure on themselves to succeed at work, but lack the personalized support to achieve their goals.

The feeling of success is a basic human need, and it’s not being met. The result is the Great Resignation, the Antiwork movement, and a general feeling of burnout—exacerbated by the impact of the pandemic.

This problem space is big, valuable, and unsolved.

But, you can’t pitch a problem. Investors, customers, mentors, and friends all want to know: How are you going to solve it?

Innovators need to strike a tricky balance. On one hand, they need to craft a convincing & inspiring story about their best working hypothesis. On the other hand, they need to be skeptical of that story—constantly open to new and disorienting feedback.

This is the very definition of cognitive dissonance: a key source of anxiety and stress in the early days.

Our problem space has been our touchstone—a constant foundation that keeps us oriented and energized. 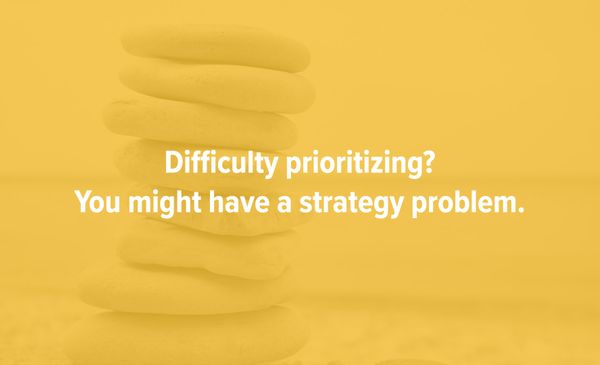 In this new Reforge essay, Zainab Ghadiyali (ex-Airbnb and Facebook) and I describe "The Product Strategy Stack", a tool you can use to define clear strategy and assess your progress.